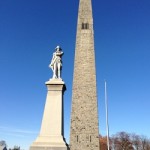 In August of 1777, General John Stark, aided by the Green Mountain Boys, denied British troops access to supplies stored in Bennington, Vermont, by defeating them in a battle just over the border in New York State. A pivotal event in the American Revolution, the “Battle of Bennington” left British forces woefully unprepared for the later Battle of Saratoga.

Today, the spectacular 306-foot Bennington Battle Monument stands at the site of the military storehouse. On the ground level, visitors can explore exhibits about the design and construction of the monument. The beautifully landscaped grounds feature additional monuments and interpretive signage. Amenities include a wonderful shop, picnic tables and accessible restrooms.

Please note: the elevator and observation level are temporarily closed.