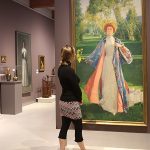 Come to Bennington Museum where we celebrate the region’s diverse arts, rich history, and culture of innovation throughout fourteen gallery spaces of permanent and changing exhibitions.

On view June 27 through November 3, 2020 – Robert Frost, “At Present in Vermont.”  A special combined tour has been created for this exhibition. See below.  A treat for quilters, the magnificent 1863 Dear Jane Quilt – on view from Labor Day through Columbus Day.  The Museum is the proud caretaker of the largest public collection of Grandma Moses paintings in the world with many of her paintings always on view.  The Military and Early Firearms Gallery commemorates the Battle of Bennington, while Mid-Century Modern Gallery offers paintings by Paul Feeley, Jules Olitski and other mid-20th century modernists.  Gilded Age Vermont features the 1924 Martin Wasp Touring Car and one of the oldest “stars and stripes” in existence – the Bennington Flag.  We look forward to welcoming your groups and providing them with a memorable experience as they explore Bennington Museum and the Bennington Museum Store.  Wheelchair accessible.

Reservations Please. Groups of 10 or more.  Driver and escort complimentary and receive a 10% discount in the Museum Store.

Price includes admission to the Museum and docent where noted.