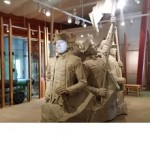 Discover what life was like for thousands of Revolutionary War soldiers at the fort atop Mount Independence.  Built to guard against a British attack from Canada, the fort was manned from 1776-1777.

Named by American troops in honor of the Declaration of Independence, this National Historic Landmark is one of the least disturbed Revolutionary War sites in the U.S. An extensive trail system including a handicapped-accessible trail and interpretive signage offers a true “soft adventure” experience.

Visitors enjoy beautiful scenery while exploring the archaeological remains of this 300+ acre site. The Museum chronicles the story of the site with exhibits featuring artifacts and interactive displays.  Amenities include a museum shop, picnic tables, accessible trail and accessible restrooms.

Group Policy:
Groups of 10 or more: $3.00 per person. Reservations required.